I have wanted this Funko since I first started collecting them. Draco Malfoy is another one of my favorite Harry Potter characters, so of course I would want all his Funko Pops! If my memory serves right (which it probably doesn’t) the regular Draco Malfoy Funko Pop was the third Funko Pop I ever purchased (the first one was either the regular Hermione Granger or Daenerys Targaryen. Whichever one wasn’t the first was the second. I just can’t remember the correct order anymore). Anyway, this Funko in the top three of my Funko wishlist for a long time now, but he was always so expensive! So I basically gave up trying to obtain him for a long time and just focused on getting easier to obtain and more affordable Funko Pops. But then one day the eBay Funko Pop Gods were in my favor and I was able to snag him for a reasonable price (under $21 for both him and the shipping for anyone who’s curious). When he arrived in the mail and I opened him I squealed really loudly, making more boyfriend look at me like I was crazy! Now he sits on my Draco/Quidditch shelf and I just adore him so much!

This is another Funko Pop that has been on my wishlist since I first started collecting Funko Pops. This is one of my favorite scenes from Prisoner of Azkaban and when I saw there was a Funko Pop for it, I knew I had to eventually add it to my collection! This one is another that I held off on getting because he has always been on the pricier side and I couldn’t justify spending all that money on him. Well on the day the eBay Funko Pop Gods sided with me getting Draco, they also sided with me getting this Funko Pop! I found him on eBay for $48 (free shipping, which really swayed my maybe to a yes), and now he sits on my bookshelf with the mini Boggart as Snape keychain that I ordered from Hot Topic. The funny thing is I actually bought the keychain because I was convinced I would never get the larger one and the next day I got the bigger one! So it’s awesome to have both of them on my shelf now. He is really well detailed, my favorite details being the vulture hat and the “fur” around his. Overall, I am just so excited to finally have in my collection!

This is probably one of my favorite moments in the Chamber of Secrets. Imagine seeing your favorite character turn into your favorite animal! Who wouldn’t love that? So when this Funko came out, I knew I had to get it. Since I display my Hermione’s in movie order, then in scene order within the movie, this Funko comes after the Hermione brewing the Polyjuice Potion. Spoiler alert for anyone who doesn’t know: The Polyjuice Potion is what caused Hermione to turn into a cat because she thought she had plucked human hair from Millicent Bulstrode’s robes, but it wasn’t, it was cat fur! So I love looking at my Hermione shelf and basically seeing the cause and effect of taking the Polyjuice Potion! Also, this Funko is super cute and just makes me really happy!

This one was an easy and obvious purchase for me. I’ve said it several times on this blog, on Facebook, in real life, and probably several other places that Hermione Granger is my favorite Harry Potter character (and probably my favorite literary character ever if I’m honest). So when I got the email from Wizarding World that it was available for pre-sale, I was so excited! I was even more excited when it arrived, but when it arrived I was faced with a dilemma- Did Hermione’s Patronus go on the shelf with Harry’s Patronus? Or did it belong on my Hermione shelf? In the end it went on my Hermione shelf and was the perfect addition to my Hermione collection. Honestly, these Patronus Funko Pops are some of the most beautiful Funkos I’ve ever seen. As long as they keep making Patronus Funko Pops, I will continue to purchase them because they are among some of my favorites that I own! 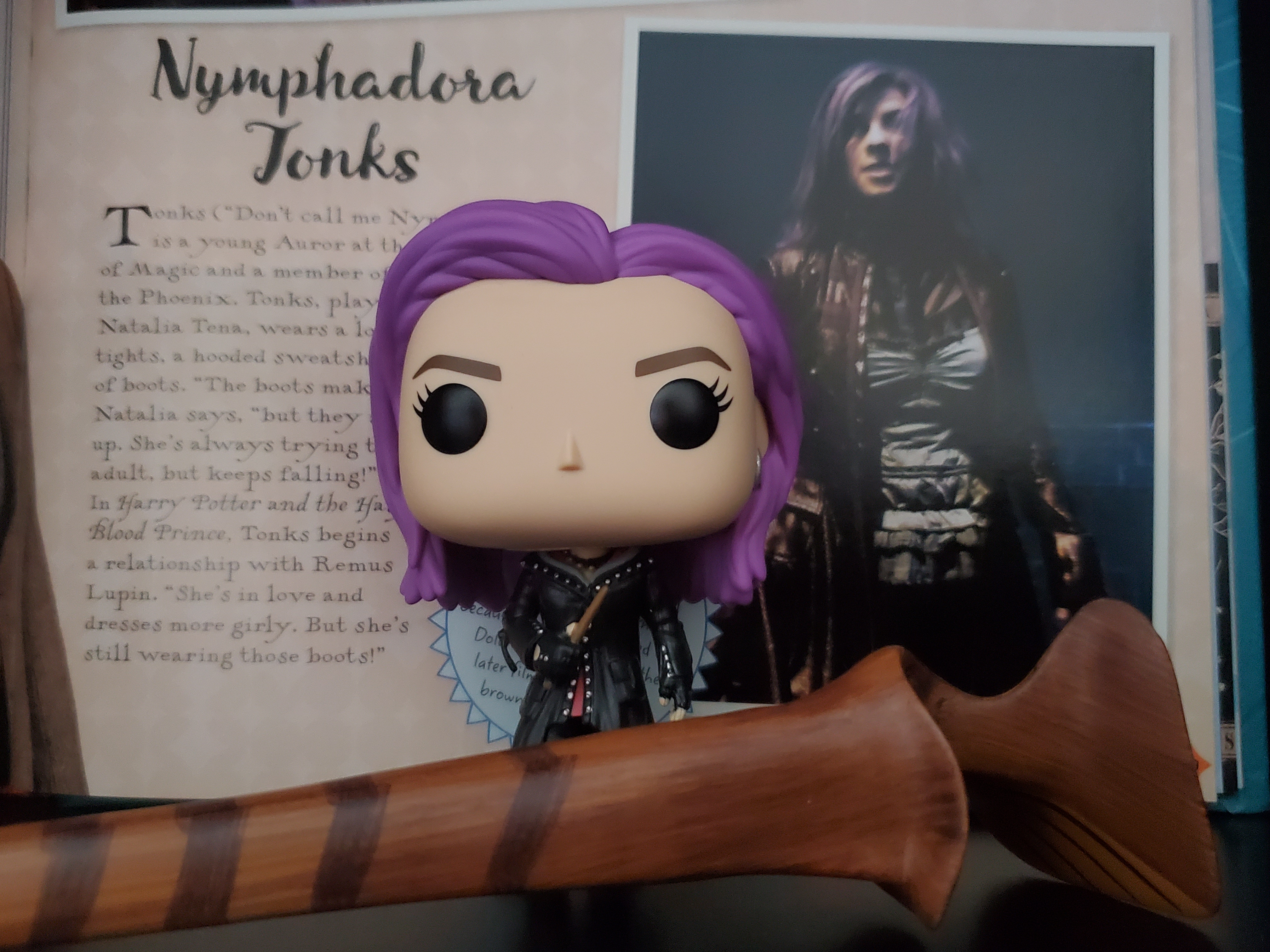 “Don’t call me Nymphadora!” I swear I heard her saying that as I typed her name above! Tonks is one of my favorite Harry Potter characters and personally, it kind of pisses me off that she didn’t get much screen time in the movies, especially because they didn’t really touch on her and Lupin’s relationship. If you’ve never read the books, that probably confused you! So if you still haven’t read the books, I suggest you do (and you can thank me later). So when I saw that Tonks was FINALLY getting a Funko Pop, I knew I wanted to add it to my collection. The moment I received her in the mail, she quickly made her way onto my favorite Funko Pops list. My favorite thing about her is the purple hair. It’s such a good shade of purple and it makes her unqiue from other Funko Pops I have that have hair (which are all normal colored). Even her tights look like they have rips, which is really cool! Overall, I am really happy to add her next to my collection and put her next to Lupin in his werewolf form!

I admit it- Dumbledore isn’t one of my favorite Harry Potter characters. I don’t dislike him, but he doesn’t have a spot in my top five favorite Harry Potter characters and doesn’t have one in my ten list either. His somewhere in my top 15 or top 20 list, but I haven’t given much thought to where he would rank. But when I saw this Funko Pop, I knew I wanted him. For starters, he is a really well-detailed Funko Pop. Most Funko Pops get generic looking wands because of their small size, so the fact that he actually has the Elder Wand is awesome! The detailing on his outfit is very well done and is one of my favorite parts about this Funko Pop. Honestly, my absolute favorite part of this Funko Pop is Fawkes sitting on his hand. I absolutely love Fawkes and the detailing on him is amazing. I feel like at any moment he’ll blink or move his head. I already have a Fawkes Funko Pop, but if they made another one with him in this pose, I would happily buy it! But this is one awesome Funko Pop and I am happy it’s in my collection.

So there you have it! Which one was your favorite? Let me know! And what Funko Pops are on your wishlist? I’m always curious to know what Funko Pops everyone is looking for! Have a great week everyone!