A few months ago I posted about five of my favorite Harry Potter replicas. Because I enjoyed writing and photographing that post so much, I’ve decided to do a part two!

This wand is special to me for so many reasons. The first reason being is that it is the first full sized wand I ever purchased. The second reason being I purchased it for a little over $13 at Barnes & Noble! That’s right- I was able to purchase a Noble Collection wand for $13 and change! The reason I was able to get it so cheap is that it was in the clearance sale section for 50% off. I thought it had been put in their accidentally, so I went over to one of the associates and asked her to price check it for me. Sure enough it was on sale and her guess was that it was there is because the box had some wear to it, but the wand itself was still in perfect condition! So with the 50% off plus my 10% off membership, it almost feels like I stole this wand! I took it out of the box and it now proudly sits on my Fantastic Beasts shelf. This wand is stunning and so unique to other wand designs. I know a lot of people like the Elder Wand, but to me Dumbledore’s original wand is a lot cooler! It has a good weight to it and I love the runes on the handle. Plus it’s black, so it matches my aesthetic very well!

I have never made any secret of it- Hermione Granger is my favorite character from Harry Potter and she will always be my favorite character from the series. I have a whole shelf dedicated to her and she is always the character I choose to play as when I play The Battle for Hogwarts! So when I saw that Noble Collection was releasing this bag again, I knew I had to purchase one. So when I found it at Barnes & Noble, purchasing it was an easy decision, partially because I wanted it so badly and partially because I had a coupon to go along with my membership! It is a very spacious bag- but sadly I can’t fit my whole library in it like Hermione could with hers- so it can be used as an everyday bag! But I personally am saving it for special occasions because I’m worried about ruining it with everyday use. The material and color of the bag is very nice and I appreciate the beading detail on it, especially the little tassel at the bottom. It can be worn over the shoulder or across the body- I prefer it as over the shoulder. If you’re a collector of Harry Potter replicas, Hermione Granger items, or just want a really nice bag, then I highly recommend it! Now I just to start another shelf for my Hermione collection… 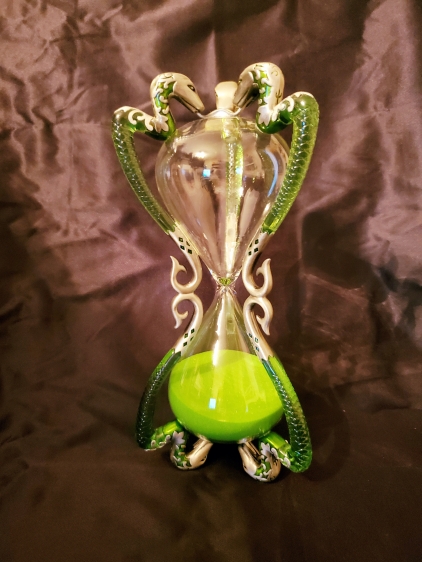 This is one of my newer replica purchases. I’ve been wanting this hourglass pretty much since the movie for The Half-Blood Prince came out. I’ve always thought hourglasses were interesting and really cool looking, so I knew one day I would need to own this beautiful piece. I purchased it from Barnes & Noble using a 20% off coupon I had received in my email and my membership, so I saved a nice chunk of change on it, which makes it even better! As much as I love my Harry Potter replicas, I also love a good savings- a skill I’ve picked up from my mother, thanks mom! And it is everything I hoped it would be and more. I love everything about it. The detailing on the snakes is really nice, the coloring is stunning, and it is really well made! It now proudly sits next to my Ravenclaw diadem on my shelf.

Raise your hand if you’ve waited and waited for your Hogwarts letter to arrive, but it still hasn’t. Well that was me up until my 28th birthday when the day after I returned home from my first ever trip to The Wizarding World of Harry Potter, my Hogwarts letter had finally arrived! When my boyfriend purchased my Hogwarts trunk purse for me, it came with a personalized Hogwarts acceptance letter. Receiving that letter along with my trunk after visiting one of the places I’ve dreamed about visiting for so long… I felt like all my ten-year-old dreams had finally come true- well at least the Harry Potter ones! Right now it is propped up on my shelf near my Monster Book of Monsters, but I plan on getting it framed in the near future. So if you still haven’t received your Hogwarts letter, then visit Platform 9 3/4 and make it happen! It’s also a great gift idea for the young witch or wizard in your life who is eagerly awaiting their Hogwarts letter.

Prisoner of Azkaban isn’t my favorite movie or my favorite book, but I love a lot of the things that have come from it! One of my favorite parts of Prisoner of Azkaban the movie is the scenes with the Knight Bus. I absolutely LOVE the Knight Bus! And in the front of this bus is a talking shrunken head. I love the shrunken head. The accent, the bad jokes and puns, just everything about the shrunken head makes me laugh! It’s also one of those scenes that my dad and I often quote at each other, so it has a special place in my heart for that reason as well. So when I found out they sold the shrunken head in Borgin & Burkes, I knew I had to purchase one! Admittedly it took me a few visits to purchase it, but one of the last times I went there they were sold out and one of the associates told me they wouldn’t be getting it back in and I was devastated! But then another associate in another shop told me they would be getting it back in stock, so then I was super confused. Well my next visit after that one I went into Borgin & Burkes and there they were! So I grabbed one because I wasn’t going to take the chance of missing out on it again. And it is just so cool! It says four different phrases from the movie, but I won’t tell you which ones to keep some of the mystery! I’m not sure where to hang him yet, but I know one day when I have a car of my own, he will be going on my rear view mirror!

So there you have it, five more of my favorite Harry Potter replicas! There is still more of this series to come, so be ready for those! And if you could purchase any of these replicas, which one would you choose? Let me know! Have a magical week everyone!