Harry Potter Funko Pops: Picking My Favorite 5 That I Own

I make no secret of it- I am Harry Potter obsessed! And as I’ve gotten older, that obsession has only grown stronger. I no longer just own the books, I own a ton of merchandise, a good portion of that being Funko Pops. If I remember correctly- which I might not because its been so long- my first Funko Pop was either Daenerys Targaryen from Game of Thrones or Hermione Granger from Harry Potter. I do know for a fact that though whichever one wasn’t first was second and then Draco Malfoy from Harry Potter rounded out my top 3 of the first ones I owned. Over the years my Funko Pop collection has grown quite a bit, Harry Potter and Game of Thrones being the two I own the most of. And with the release of Fantastic Beats and Where to Find Them, my collection grew even bigger! So in honor of my love for Harry Potter and Funko Pops, I thought it would be fun to share my 5 favorite Harry Potter Funko Pops I own. They are in no particular order as trying to put them in order was hard- not as hard as narrowing it down to 5 though, but still hard enough! My 5 favorite Fantastic Beasts and Where to Find Them Funko Pops will be an upcoming post, so keep an eye out for that!

So here is my list of my 5 favorite Harry Potter Funko Pops that I own! The moment I first saw this Funko in my email, I knew I had to add it to my collection. The ethereal vibe and beautiful blue of the stag spoke to me on an emotional level and I knew if I didn’t snag it I would regret it! Also, I own the Sirius Black in his Animagus form and Remus Lupin in his Werewolf form, so I wanted to have each of the Marauder’s in some way- they haven’t released Peter Pettigrew as Scabbers yet, so I’m hoping they do soon so I can complete the set. My only wish is that it glowed-in-the-dark because Patronus are a glowing positive force, so if it would have glowed-in-the-dark, it would have felt more ethereal and more realistic. But that little wish aside, it is an absolutely amazing Funko Pop that I am proud to own. And what’s even more amazing about it is that I was able to buy it through the Wizarding World website using my Wizarding World Gold which gave me a discount and also has an exclusive sticker on the box showing it’s a pre-release, which is something I’ve never had the opportunity to do before. So that just makes it even more special.

I’ve made no secret of it- Hermione is my favorite Harry Potter character. In fact, most of my Funko Pops are of Hermione! The only one I don’t own- to my knowledge- is the Hermione that comes with the Hogwarts Express- sadly I had to settle for the one that had Ron. So when I found out this Funko Pop existed, I bought it off eBay as soon as I could. It quickly became one of my favorite Funkos because of the detail to it. I love how they have Hermione holding the potion ingredient bottles and the little cauldron that comes with it that has smoke coming from it. The cauldron also has great detail with its legs and the handle. Overall, it is just an amazing Funko Pop and is one of my favorite Hermione Funkos that I own. 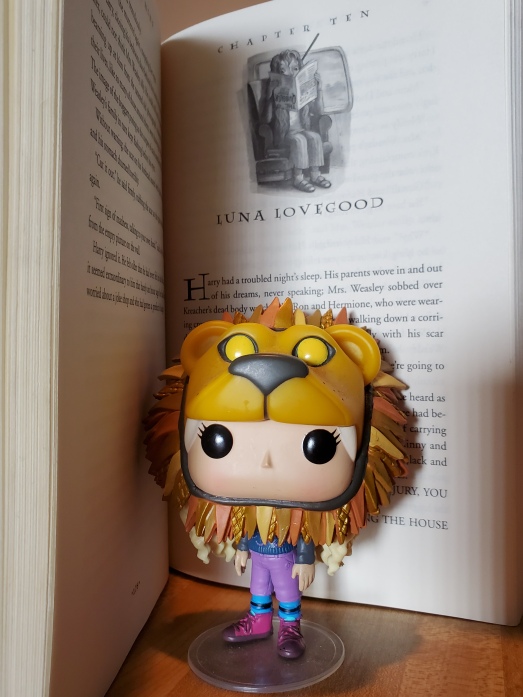 I first saw this Funko on Hot Topic’s website and immediately knew I needed to add it to my collection. Luna is one of my favorite characters because of her quirkiness, so seeing her in this lion headdress that she made to support Gryffindor made me really happy. I think the detail on the headdress is amazing and I appreciate that they kept her outfit true to the film because its simplicity doesn’t distract from the headdress. I didn’t realize she had a stand at first, so when I first bought her she kept falling over from the weight of her head. But now that I have her on the stand, she stands up tall, proud, and ready to cheer her friends on!

4. Remus Lupin in His Werewolf Form

This was another Funko that I came across on Hot Topic’s website and immediately knew that I needed it in my collection. His werewolf form struck an impressive cinematic form, so to see that shrunken down the collectible size excited me. The detail on this Funko is impressive and I feel like photos don’t do it justice. All over the Funko there are little hair details and if you look closely, you can see his ribcage. My only wish is that his eyes glowed-in-the-dark! I think that would have been awesome, but once again it’s a little wish for an already awesome Funko Pop.  He was another one that I had a hard time keeping up because of the weight of his head until I realized he also came with a stand! So my advice is ALWAYS check your Funko boxes to see if they have stands!

The Hogwarts ghosts Funko Pops are some of my favorites that they made. The color of them, the details, the eeriness, all of it makes them some of the coolest Funkos to own! When I saw this GITD Moaning Myrtle on Facebook, I knew I wanted her, but didn’t think I would be able to get her because of the day and time she was being released. Well thanks to my awesome sister-in-law picking her up for me, she became a part of my collection! This photo shows the first time I truly got her to her full glow level and I was amazed by how well she glowed! She has some texture on her that you can’t see in the photo, but can feel when you hold her. She is a really good representation of Moaning Myrtle from the movie and I absolutely adore her!

So those are my five favorite Harry Potter Funko Pops that I own! Like I mentioned above, one of my next posts will be my 5 favorite Fantastic Beasts and Where to Find Them Funko Pops that I own, so keep an eye out for that! If anyone else collects Funko Pops, I would love to hear about your collection and what some of your favorites are! Or if there is anything else you collect, I would love to hear about that as well.

Have a great week everyone!